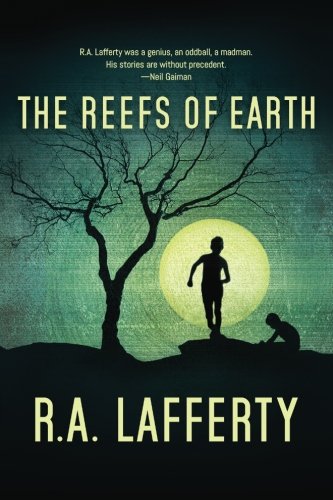 We know this has been a long time coming, and appreciate so much all of your patience with the process. Our first of Lafferty’s novels back in print is The Reefs of Earth (Locus Press 978-0978621025, 154pp, tp) which is now available in trade paperback and kindle versions. Our huge thanks to everyone who helped get this going, especially James Northcutt.

The Dulanty family can pass for human, but they’re actually alien Pucas, stranded on the remote backwater planet Earth in the tiny (and corrupt) Appalachian town of Lost Haven. The six Dulanty children (seven, if you count the disembodied Bad John) get tired of being spurned, scorned, and scapegoated by the townsfolk, and hit upon the obvious solution: they’ll murder every human in the world, using hatchets, rifles, and the otherworldly killing verses known as Bagarthach, and transform the planet into a paradise for the Dulantys alone. Fortunately for the human race, the Dulanty children aren’t very adept at murder, but their attempts at wholesale homicide make for a read that’s alternately harrowing, hilarious, and heartwarming. Come visit the Reefs of Earth, and experience the incomparable imagination of visionary author R.A. Lafferty, a writer Jo Walton called “very weird, very clever, and impossible to forget.”

R.A. Lafferty was a genius, an oddball, a madman. His stories are without precedent. —Neil Gaiman

What a word slinger: what a richness of idea and image, in Irish-cadenced prose! Show don’t tell? The pleasure’s in the telling. —Terry Bisson

Lafferty is one of a kind, a magician of strange images made fleetingly recognizable, of familiar emotions made strange and new and haunting. —Nancy Kress